It had been a while since we’d been on a date. The whole having-a-kid thing makes it a little more difficult. Suddenly, a month rolls by and you begin to ask yourself the question, “Have I talked to my husband about anything other than poop, bath time, or nap schedules?” I don’t know about other new parents, but for us, it has been easy to start treating one another like co-workers rather than spouses.

Rather than greeting my hubs with a smooch and a hug, I sometimes find myself tossing him a 4 month old and running out the door and yelling, “Don’t try to find me!” over my shoulder. We’ve drastically improved our teamwork skills (“you start dinner, I’ll feed him, then you give him his bath, then I’ll finish dinner…”), but the whole husband/wife dynamic can really start to take a back seat if you’re not careful.

So a few weekends ago, my mom graciously offered to watch Benjamin while Matt and I went on a date. We were both pretty excited and couldn’t wait to have a few hours to ourselves. So on Friday evening around 6:30 PM, we pulled out of the driveway – both stifling yawns – and set out on our adventure.

The evening didn’t go quite as planned.

The Mexican restaurant wouldn’t take our Groupons (stupid fine print) so we ended up paying way more for our dinner than planned (which is kind of a big deal when you’re on one income). We wanted to try out an indoor glow-in-the-dark putt-putt course at the mall. We got there only to find out they closed in ten minutes (seriously? On a Friday night?). We attempted to go to the batting cages down the street, only to find out they, too, were closing.

Then – light bulb! – we remembered the janky Celebration Station on Wendover – THEY have putt-putt, let’s do that!

As we pulled into the parking lot, my leftovers from dinner came flying off the dash, dumping nachos on the floorboard, the passenger seat, and – yes – on my white pants.

I just sat and stared. Maybe we should just go home, I thought.

Matt gallantly ran into the station of celebration and grabbed handfuls of napkins. Several minutes later, the faint aroma of nacho cheese hovering around me, Matt and I walked silently into the building.

Kids were running around and screaming. Teenagers were hanging all over each other and getting a little too cozy by the skeeball machines. Parents were staring blankly into the distance and holding piles of tickets shoved into their hands by children. Smells of sweat and pizza mixed together in the air, and not for the first time that night I thought, Maybe we should just go home.

But no, we were not to be deterred. We purchased our game, picked out our golf balls, and headed for the course.

By this time it was dark. Half the golf course lights had burned out, kids kept running through our game, and less than halfway through, one of the holes ate Matt’s golf ball (no, really…we never found it).

But as we began junk-talking each other and laughing and overreacting whenever we missed an easy putt, it suddenly dawned on me: this was the first place we had ever come together, just the two of us, before we had even begun  “officially” dating.

Once we finished our game, we sat on a nearby bench to tally our scores (see picture to the right if 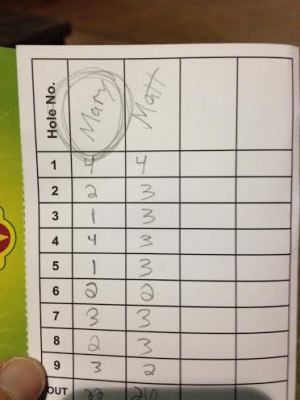 you’re interested in who won) and to chat. Would we have ever guessed six years ago that we’d be back in this place now, enjoying some time out together with a little one at home?

I can still remember that night like it was yesterday. I was a freshman at UNCG, and quite frankly over the moon that Matt had asked me to go out. I’ll never forget hanging out with my roommate and another friend in the dorm before leaving. My friends had asked what I was going to wear, and they looked at me, mortified, when I motioned down to my jeans and t-shirt. They ended up forcing me into a nicer top, claiming I had to look cute. (If you guys are reading this now, you should know that Matt still remembers what I was wearing that night, so – good job).

Date nights were a little different then. Who cared how much it cost where we were going (I mean, I wasn’t paying…)? What did it matter if we got back late? We could just sleep in the next day. So what if we spent 3 hours talking after playing putt-putt? 2009 Matt and Mary had the time.

Fast forward back to the present. As we drove home that night, I thought about how our date nights have changed.

I used to agonize over what I would wear on each date. I’d purposefully order food that I could eat with the certainty of avoiding getting anything stuck in my teeth. I’d analyze my responses to his questions and triple check my hair when passing a mirror.

Don’t get me wrong – it’s not like I’ve let myself go since then or anything. I still prefer not to have food in my teeth and still try to dress up for dates. And I still feel my heart beat a little faster when Matt smiles and tells me that he likes the outfit I chose or that I look beautiful.

But somewhere along the way, date nights ceased being let-me-put-forth-the-best-possible-and-possibly-phony-version-of-myself-and-order-the-nicest-thing-on-the-menu-because-I’m-not-paying nights and started being I’m-exhausted-and-would-be-perfectly-content-going-to-bed-before-9 PM-tonight-but-I-also-can’t-wait-to-just-BE-with-you nights.

Somewhere along the way I went from only ordering things that could be eaten with a fork to unashamedly digging into a heaping plate of nachos while simultaneously sampling whatever is on Matt’s plate at the time.

As we walked out of the Celebration Station madhouse that night, I couldn’t help smiling at the thought of how much we’ve changed in the past 6 years. We’ve had incredible highs and also been brought extremely low. Date nights aren’t the same as what they used to be, and, quite frankly, we’re not the same two people we used to be either.

Our dating relationship is, I’m glad to say, not what it used to be. Neither will it be the same one year from now, or ten, or twenty. Someday when our kids have long been gone, our hair long turned gray, and our bodies long worn out, Matt and I will still be discovering new dimensions of one another one date at a time. And it will mean so much more because we’ll know that we’ve endured together, for better and for worse.

And that’s a pretty cool thing.