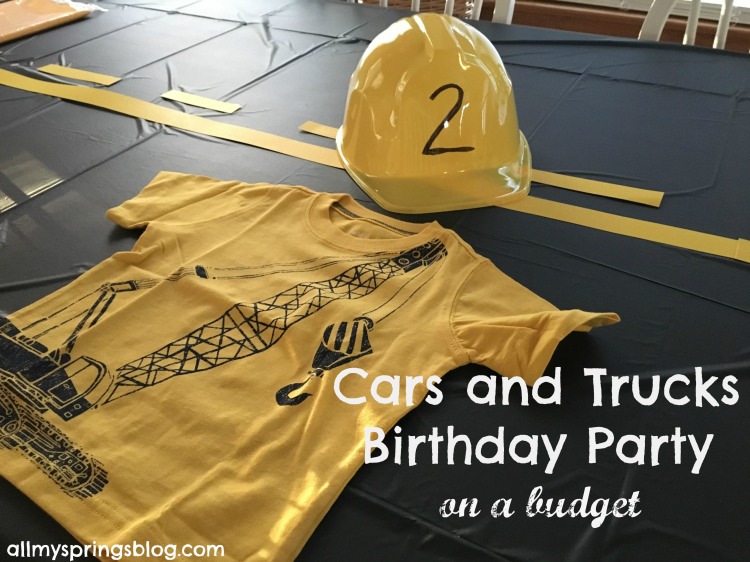 Remember that time I had a blog and wrote on it regularly? Yeah, me neither. The struggle to write consistently has been real, but I’m determined to get back on track. And what better way to start than with a mostly picture-driven blog!

So last year I shared with you my “Wild and One” Birthday Pow Wow for our son. Hard to believe, but that kiddo just turned TWO! *Tear.* I had a ton of fun putting together his birthday party last year, but I’m not going to lie—this year, being almost 30 weeks pregnant with our second, I just didn’t have the same amount of energy to put into this year’s party. I still wanted to do something fun and creative, but I wanted it to (1) require less prep time and (2) cost even less than before.

Our little man is currently OBSESSED with anything that has wheels. So it seemed only appropriate that we go with a cars and trucks/traffic/construction/anything-with-wheels theme.

What we ended up with was a super cute (and affordable!) party that left us with one pooped toddler who couldn’t stop talking about the tractor and cake and balloons and his sweet new construction worker hat.

So check out these ideas below!

Roadway table and construction worker garb: One black plastic table cloth that I found in a drawer in my house + 1/4 of a piece of yellow poster board = a pretty cute looking table spread. I just cut up the poster board and taped it down the length of the table and voila! Last year, I made B’s “Wild and One” t-shirt with my Cricut, but have since actually sold the machine (insert tears and violin music here). So instead of DIY-ing the shirt, I hit up Carter’s and found this cute tee for $5—which, honestly, was the most expensive single item I bought for the party, so I was willing to splurge and just count it as part of B’s present. My mom actually found the construction hat at Party City and I just added the “2” with a Sharpie. B was super proud all decked out in his gear.

Traffic Lights and Street Signs: The traffic lights took me about 10 minutes to make, the “Party Zone” and “Benjamin Parkway” signs even less. All my signs came from poster board at $0.69 each.

Construction Zone Cake: I’m not including a closeup pic of the cake because you don’t want to see it. I won’t lie to you: as the morning went on, the cake began looking more and more like a real construction site, if you catch my drift. Things started crumbling, there were landslides, and a bulldozer almost fell off a cliff. I’ll just put it this way—it was to my advantage that the cake was supposed to look half destroyed.

I’ll be the first to admit that I’m no baking guru, but the deck was slightly stacked against me with my limitation of not being able to use milk or eggs for the cake (due to B’s allergies). Last year’s cake fiasco involved a screaming child and a rock-hard cake that ended up falling on the floor, so I was determined that this year B would actually be able to both eat and enjoy his cake. I found a ton of vegan recipes online, but to be honest, they all involved more effort than I wanted to put forth. So for the cake itself I ended up using a few boxes of Dark Chocolate cake mix (egg and milk free) and two cans of pumpkin. It was really good and plenty moist, but it was difficult to spread the icing on, which contributed to the rather realistic look of a pile of dirt being bulldozed. I dug a spoonful of cake out of one side and filled the dump truck with crumbs, so it ended up looking pretty cute (more or less).

Sure, the cake may have almost fallen over, but at the end of the day, the entire cake was eaten (booyah!). B loved it, friends and family liked it, and in my book that’s success. After all, it’s what’s on the inside that matters most, right? 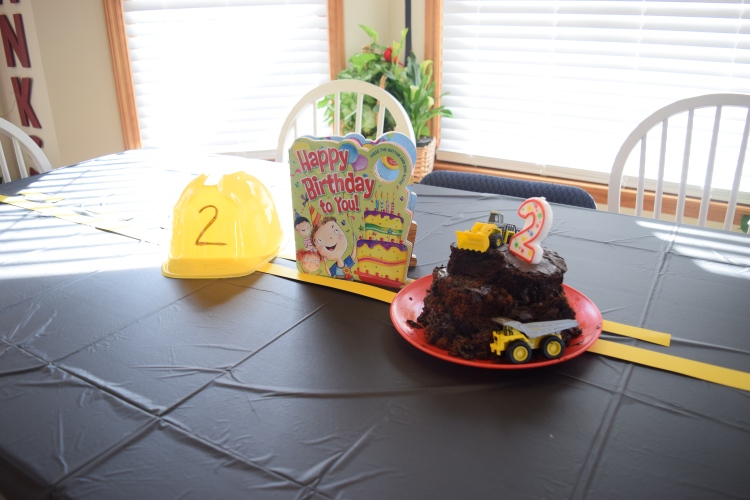 Food Spread: This was one of my favorite parts! I grabbed a few of the toys B already had and used them with the food spread. The dump truck held brownie bites, the bulldozer was spilling over with tortilla chips, and (my personal favorite) the tractor was unloading bales of hay (a.k.a. rice crispy treats). Seriously, is that cute or what?

Entrance Decoration: Balloons, a couple of my dad’s old construction cones, a traffic light, and a few construction signs introduced the theme to all our guests as they entered. 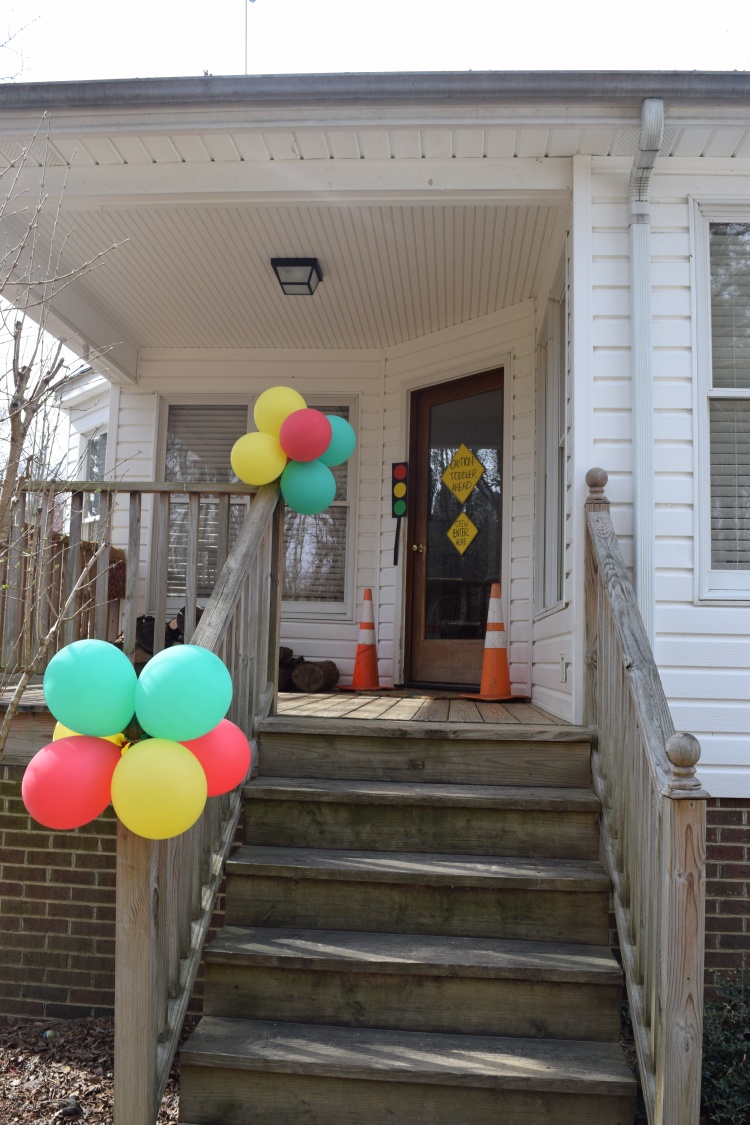 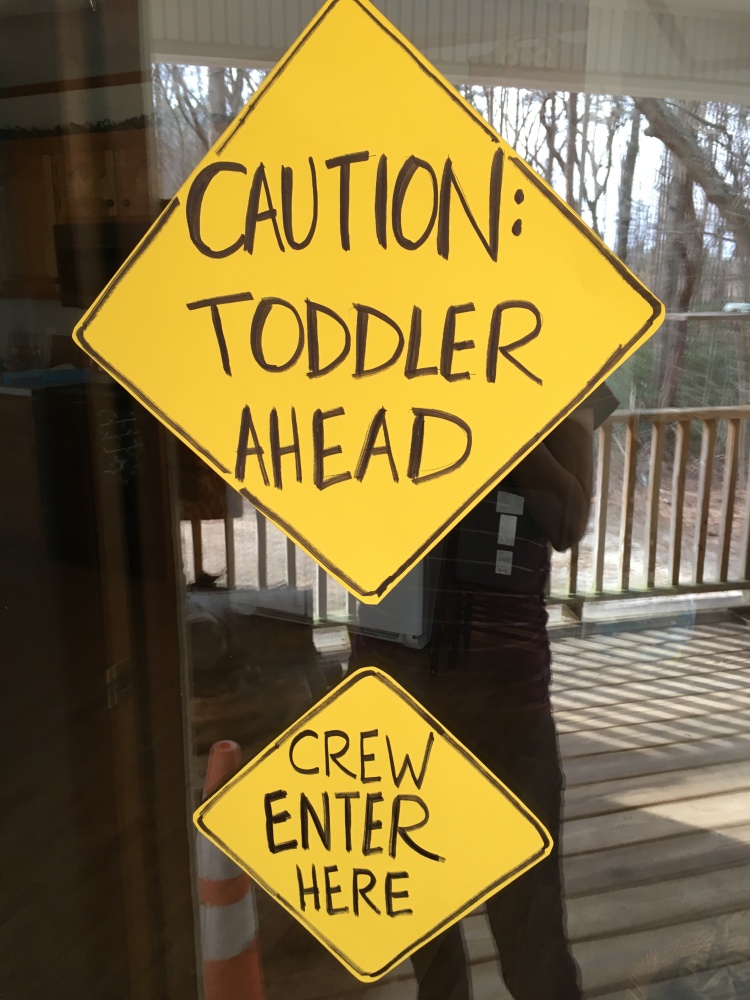 Party Game: I like incorporating games with every party to get people involved and having fun! Last year I did a simple quiz about B’s first year. This year I was initially planning to do a game of Jeopardy, but decided to add a “cars and trucks” twist—so I made this nifty little board game!

I split the family and friends into two teams, guys vs. girls. (Gals were the bus, men were the truck). I created the Jeopardy board (second picture down) like originally planned. (I forgot to take a pic before I removed all the trivia cards, but you can at least see the categories). Instead of playing for hundreds of points, the teams were playing for spaces on the game board. So for example, if a team chose “All About Benjamin for 3 spaces” and got the answer correct, they could move 3 spaces on the board. The game board included a few shortcuts, which I thought added an extra layer of strategy to the game.

The game ended up being a ton of fun and—wow—definitely brought out the competitive side in my family. Seriously, they made me more tired that day than my toddler did.

The poster boards were $0.69 each, and I drew and cut out the bus and truck with poster board scraps. The index cards I already had. The trivia I came up with whenever inspiration hit throughout the week before the party, and I made the game board in about 15 min during one of B’s snack times (hence the barely discernible peanut butter handprints at the top of the poster). 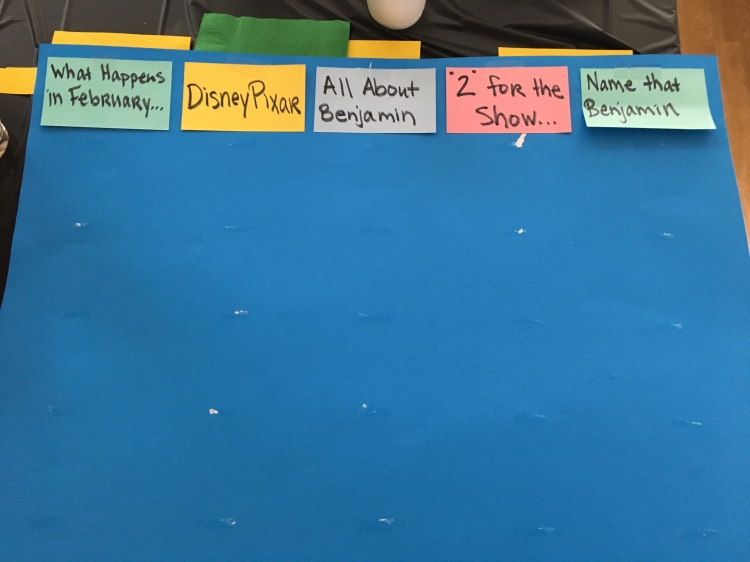 We wrapped up the party with a tractor ride! My dad hooked up his trailer and took everyone for a short ride around the property. B couldn’t (and still can’t) stop talking about “Pop’s tractor and trailer.”

When it was all said and done, all the decor came from five or six $0.69 pieces of poster board, balloons (graciously provided by my mom), a plastic table cloth, and toy trucks that my son already had. So we’re talking less than $5.

The food (which was lunch/snacks/dessert for 14 people) came out at just under $60, which is about $4 per person.

Plates/napkins/cups/all that jazz was around $5. (Dollar Store, woot woot!)

So overall, the whole day came in around $70. (Insert victory dance here.)

I was pleased with the results and was able to relax and have a good time instead of spending hours stressing out about buying a ton of stuff or making things look Pinterest-worthy.

And wouldn’t you know it, when B talks about that day he doesn’t talk about his mom’s impressive decorating skills. He talks about his grandparents and cousins and how he wants to watch the video again of us singing “Happy Birthday” to a beaming kid in a plastic construction hat.

Now that’s what I call a good party.

One thought on “Cars and Trucks Birthday Party on a Budget”