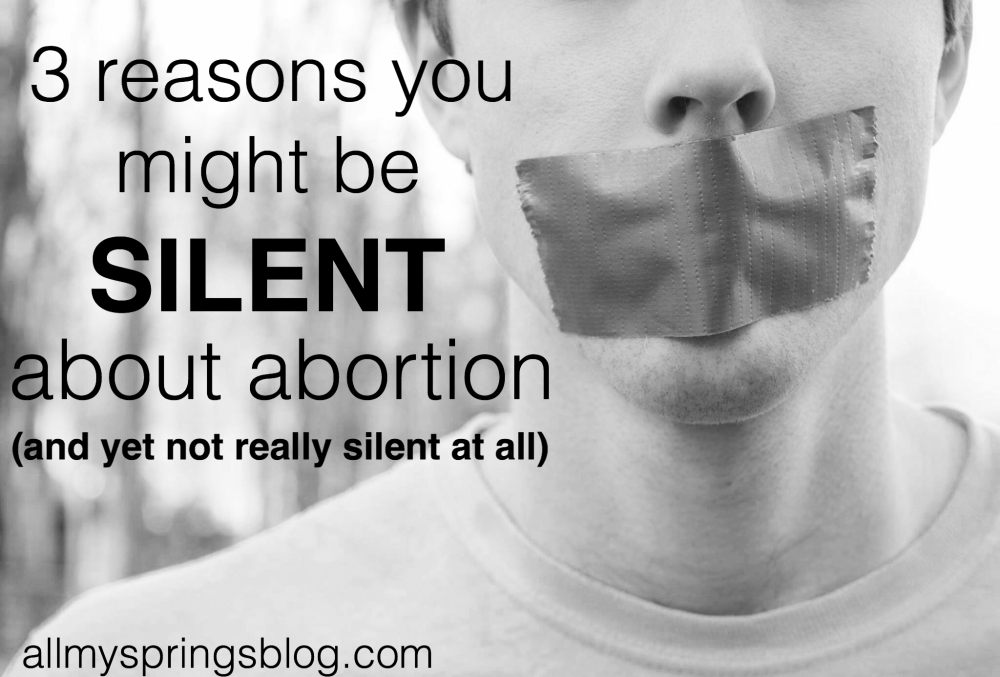 Abortion isn’t usually anyone’s first choice of topics to talk about. This issue evokes so many feelings within us that we will often do whatever it takes to avoid experiencing these feelings.

And one of the easiest ways to avoid this topic is through silence.

In light of Sanctity of Human Life Day (which is January 17th), I’ve spent the last few weeks doing a lot of reflecting on both the issue of abortion and the silence that so often accompanies it. I’ve noticed three primary reasons why we may be silent:

You are silent because abortion is a minor issue. I’ll never forget as a freshman in college when I was talking to a friend about the upcoming presidential election. I made a comment that I just couldn’t in good conscience vote for a certain candidate because of his stance on abortion. My friend off-handedly stated that, while he didn’t agree with the candidate’s abortion views, he wasn’t going to let a “minor issue” dictate his voting choice.

This post isn’t meant to be political, although I realize I may have already lost many readers. My point is this — many of us have convinced ourselves that abortion isn’t something to get in a tizzy about. The world is burning with plenty of other issues — why get all wound up about something that is “safe, legal, and rare”?

Allow me to submit to you this truth — there is nothing “minor” or “small” about the more than 57 million unborn boys and girls that have been slaughtered in the US alone since 1973. There is nothing minor about a practice that has more casualties than every war in the history of the world combined.

Where we see a disregard for the most basic right to life, we see a breakdown of even the most basic of morals. If unborn children can be sacrificed to the gods of convenience and circumstance, then what’s to keep us from disregarding any other laws of morality?

If life doesn’t matter, then what does matter? If it is not wrong, then what is wrong? Everything becomes relative, and right and wrong become a matter of opinion.

You are silent because abortion is not your fight. You don’t agree with abortion. You wish it weren’t as prevalent today as it is. You vote pro-life and you nod emphatically if your preacher dares bring up the word in church. But beyond that, well…life is busy. You’ve got a lot going on, working crazy hours, taking care of your family, dealing with health issues, going to class, taking exams, trying to make ends meet…there’s just no time to enter into this timeless debate, and quite frankly, there are probably plenty of others who are better at engaging this abortion issue anyway. “I’m not called to that,” you may have said, or “I’m not gifted in that area,” or the more common, “I’m just not very knowledgeable about all that.”  And why should you be? It’s just not your fight.

I hope it goes without saying that this attitude — this “bystander apathy,” if you will — is destructive. Claiming “that’s not my problem” has indirectly prolonged far too many injustices throughout history. It’s an empty justification, but often makes us feel better for closing our ears to the silent screams of the unborn.

You are silent because abortion makes you uncomfortable. Let’s be real — abortion isn’t exactly dinner party conversation. People don’t like to talk about it. There is irony in this truth, because there is such a push from the pro-choice movement to make it a comfortable, no-big-deal topic — kind of like getting your tonsils out. It’s just another procedure, just another choice, just another right. Honestly, I would find it odd if abortion didn’t make you uncomfortable. If you have even a shred of an idea of what abortion actually is and the effects it has on both the unborn and the parents,  then “uncomfortable” would be an understatement.

Or maybe your discomfort arises from something much more personal, much closer to you. Maybe someone you know and love has experienced an abortion. Maybe you yourself have had one.  Maybe you choose silence because facing the grisly truth is just too painful and heartbreaking. If this is true for you and abortion hits too close to home, I hope you know that you are not alone. One in three women will have an abortion in her lifetime, which means you probably cross paths with both women and men every day who have been touched by this painful issue.

My hope is that discomfort would not keep you from seeking out healing and restoration or from extending acceptance and compassion towards others. Pretending that abortion doesn’t exist or isn’t painful doesn’t make it so. If anything, it only serves to further isolate those affected by it.

When silence isn’t silence at all…

The funny thing about being human is that the reasons we do or do not do something are rarely so easily compartmentalized. If silent on this issue, your motivation may not be one of the above three reasons, but rather a cross-section of all three — or even something different entirely.

As we approach another Sanctity of Human Life Day, I challenge you — and myself — to evaluate the heart behind the silence. Hindsight is always painfully 20/20, and I strongly believe that one day we will look back in horror at the reality of abortion, wondering how such a practice was ever tolerated for so long.

If you are not sure where you stand on this issue, then find out. Separate yourself from the beliefs of your friends and family, from viewpoints of your political party, or from the buzzwords and phrases of the talking heads, and do your own research. You have the right to be fully informed — don’t make the mistake of just swallowing whatever pill is presented to you.

A popular quote that is often credited to Edmund Burke is this:

“The only thing necessary for the triumph of evil is that good men do nothing.”

That good men do nothing.

Regardless of your core beliefs, this is an incredibly insightful truth. Christian scripture, while it never actually mentions the word “abortion,” speaks specifically about advocating for the weak and standing up against injustice. For example, Proverbs 31:8-9 says:

“Speak up for those who cannot speak for themselves, for the rights of all who are destitute. Speak up and judge fairly; defend the rights of the poor and needy.”

“Rescue those being led away to death; hold back those staggering toward slaughter. If you say, ‘But we knew nothing about this,’ does not he who weighs the heart perceive it? Does not he who guards your life know it? Will he not repay each person according to what he has done?”

This scripture not only calls us to stand up for others, but also states that we will have to answer one day for what we have and have not done.

This scripture has been impactful in my own life, because it tells me that claiming ignorance does not excuse me from speaking for the weak. We will one day give an account for every word and every action – even if that “action” is that we did nothing or remained silent.

Silence is never really silence at all. In fact, sometimes our silence — our refusal to speak up, stand up, or show up — is more deafening and telling than we could ever know.

Refuse to be silent.